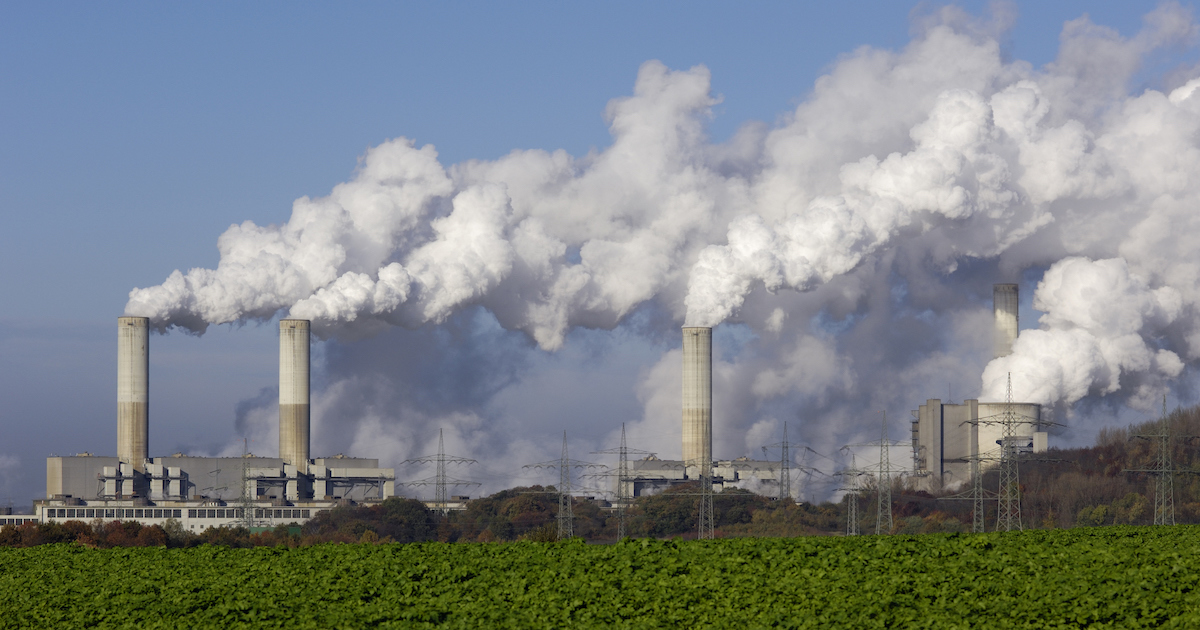 In the lead-up to the 2020 elections, the Journalist’s Resource team is combing through the Democratic presidential candidates’ platforms and reporting what the research says about their policy proposals. We want to encourage deep coverage of these proposals — and do our part to help deter horse race journalism, which research suggests can lead to inaccurate reporting and an uninformed electorate. We’re focusing on proposals that have a reasonable chance of becoming policy. For us, that means at least 3 of the 5 top-polling candidates say they intend to tackle the issue. Here’s what the research says about carbon pricing.

What the research says

Carbon pricing schemes put a financial price on carbon emission. They are widely portrayed in the economic literature as an effective way to reduce carbon emissions from high-carbon emitting industries, such as certain types of energy production. Academics and politicians often frame carbon pricing not as a cure-all, but rather as one part of a broader strategy to slow or reverse rising global temperatures.

Rising temperatures caused by climate change could cost the U.S. economy many billions of dollars. A 2017 paper in Science projects that for every 1.8 degree Fahrenheit average temperature increase in the U.S., gross domestic product will fall by 1.2% yearly — equal to roughly $233 billion at today’s GDP.

Poorer areas of the country could be hit hardest, according to the paper. By the end of this century, “under business-as-usual emissions,” the poorest third of U.S. counties are likely to lose between 2% and 20% of current income that residents earn, the authors write. The richest third of counties could lose up to 6.8% of income, according to the authors’ estimates — or gain 1.2%.

The Science paper offers one estimate of the effect of climate change on U.S. economic output, or productivity, as measured by GDP. Another paper by two Environmental Protection Agency staffers, published April 2019 in Nature Climate Change, looks at costs related to infrastructure, health, agriculture and other sectors across two scenarios.

The first scenario — where the average global temperature is trending toward 5 degrees Fahrenheit higher in 2100 compared with pre-Industrial Revolution levels — would come with about $170 billion in annual costs by 2050 across the 22 sectors the authors analyzed.

The second scenario — heading toward an average global temperature in 2100 that’s 8 degrees Fahrenheit higher than pre-industrial levels — would come with about $206 billion in annual costs across those sectors by 2050. The estimates don’t include potential cost savings from adaptation measures, such as creating dunes to protect beaches or building levees to divert floodwater, which can reduce infrastructure damages.

Aside from estimating the costs of rising global temperatures, economists have also come up with two big market-based ideas to address climate change and put a price on carbon emissions: Carbon taxes and cap-and-trade.

Carbon taxes put an initial financial burden on entities that emit carbon as part of their regular business. Think a coal-fired electricity plant. Under carbon tax schemes, governments set the price of pollution while markets determine the amount of pollution — companies can pollute and pay the tax or reduce emissions to avoid it.

There are carbon taxes in other countries but not in the U.S. Some academics have argued that there is already a kind of carbon “tax” borne by people, not companies — in the sense that some parts of the U.S. experience substantial economic losses from climate change, like from more severe storms that cause billions of dollars in property damage.

In practice, businesses could pass along the cost of a carbon tax to consumers. If a refinery that produces heating oil pays a tax for emitting carbon, customers might end up paying higher prices for home heating oil.

To some economists, this is not a bug but a feature: higher prices would lower demand for carbon-intensive fuels. In some countries, revenues from carbon pricing programs are disbursed to households to help pay higher fuel prices, according to an October 2019 paper in Climate Change and Renewable Energy.

A national carbon tax is a popular idea among some economists and policymakers in the U.S. More than 3,500 economists from across the political spectrum, including 27 Nobel laureates, support a carbon tax plan that would give dividends directly to Americans. But so far, jurisdictions in the U.S. have gone with cap-and-trade strategies over carbon taxes.

In June 1990, Colorado State University economist Jo Burges Barbier wrote in a paper in Energy Policy that “further policy instruments and considerations” beyond carbon pricing alone were needed to curtail carbon emissions from the energy sector.

Acid rain happens when those pollutants get into the atmosphere, then fall to the ground through precipitation like rain or snow, contaminating waterways and crops. Since the program’s introduction, acid deposits have decreased 30% across the Midwest and Northeast and the program prevents an estimated 20,000 to 50,000 premature deaths each year, according to the EPA.

Another national cap-and-trade program was the NOx Budget Trading Program, which operated during the 2000s and sought to reduce nitrogen oxides from power plants during the summer.

Though now defunct, the NOx Budget Trading Program prevented nearly 2,000 summertime deaths each year in participating states, most of them along the east coast, according to a 2017 analysis in the American Economic Review.

Harvard University economist Robert Stavins assesses the state of carbon pricing in a May 2019 National Bureau of Economic Research working paper. He writes that economists have reached consensus that pricing systems such as carbon taxes and cap-and-trade will be key to reducing carbon dioxide emissions:

“There is widespread agreement among economists — and a diverse set of other policy analysts — that at least in the long run, an economy-wide carbon pricing system will be an essential element of any national policy that can achieve meaningful reductions of [carbon dioxide] emissions cost-effectively in the United States.”

States have taken up the cap-and-trade baton in the last decade or so. The Regional Greenhouse Gas Initiative covers nine New England and Mid-Atlantic states and set its first carbon cap for the power sector in 2009. Since then, greenhouse gases have fallen 40% in those states, and they’re aiming for another 30% reduction by 2030. The initiative has raised $2.7 billion, which has been invested into wind and solar power generation, and to help low-income people pay their energy bills.

Power plants across those nine states generate about 112,000 megawatts less each month than plants in other states, and they emit 286 fewer tons of sulfur dioxide and 131 fewer tons of nitrogen oxides per month, according to a May 2019 paper in Energy Economics. However, that analysis finds the Regional Greenhouse Gas Initiative had a causal effect only on reductions of sulfur dioxide emissions, not nitrogen oxides.

California’s cap-and-trade program began in 2006 and the legislature extended it in 2017. It has an emissions cap affecting 80% of greenhouse gases coming from about 450 of the state’s biggest polluters.

That program “has demonstrated the feasibility and effectiveness of an economy-wide approach, compared with sectoral systems,” write economists Richard Schmalensee of the Massachusetts Institute of Technology and Stavins of Harvard in the Oxford Review of Economic Policy.

But the California cap-and-trade program may be distributing benefits, like cleaner air, unequally. Companies that emit greenhouse gases there tend to be located in areas where more people live in poverty, but the program hasn’t led to environmental benefits in those neighborhoods, according to a July 2018 analysis in PLOS Medicine.

In fact, greenhouse gas emissions in neighborhoods near polluters actually increased from 2013 to 2015, compared with 2011 to 2012, the authors find. They peg overall greenhouse gas reductions to the state importing less electricity from coal-fired plants.

Emissions reductions also vary widely by industry, the authors find. Seventy percent of certain power plants reduced emissions over the period studied, while 75% of cement plants increased emissions. A glut of credits on the market may keep lower-income California communities from enjoying the environmental benefits of cap-and-trade.

Some experts also caution that California is markedly dissimilar from most states. California has a strong, mostly popular, single-party majority in its legislature, so it’s an easier lift politically to experiment with market-based emissions reduction strategies.

Utilities in the state are also largely on board with addressing climate change, even through regulation. The state doesn’t rely much on coal to produce energy, while many other states do.

“Because California is a unique case in several respects, it is unlikely that other states in the U.S. will be able to adopt similar systems,” Guri Bang, research director at the Center for International Climate Research in Oslo, and her co-authors write in a 2017 article in Global Environmental Politics.

Finally, on the global scale, there is the free-rider problem.

Right now there’s no prospect of an enforceable, international cap-and-trade system that could put a meaningful dent in global carbon emissions. There are too many hurdles to mention, but one of them is that countries would probably want higher emissions ceilings for themselves, but lower emissions ceilings for the rest of the world, as the late Harvard economist Martin Weitzman explained in a June 2019 article in Environmental and Resource Economics.

In other words, countries want to reap the environmental benefits of carbon reduction without paying the price — they want a free ride.

The gist: “This review of long running cap-and-trade programs suggests that a new idea in carbon pricing — the idea of a carbon ‘dividend’ in the form of an equal per capita payment to all citizens —  is consistent with the successful public benefits strategy discussed here.”

Perceived fairness and public acceptability of carbon pricing: A review of the literature

The gist: “Somewhat surprisingly, most studies do not indicate clear public preferences for using revenues to ensure fairer policy outcomes, notably by reducing its regressive effects. Instead, many people prefer using revenues for ‘environmental projects’ of various kinds.”

Carbon pricing and energy efficiency: Pathways to deep decarbonization of the US electric sector

*Dropped out of race since publication date.

This article first appeared on Journalist’s Resource and is republished here under a Creative Commons license.