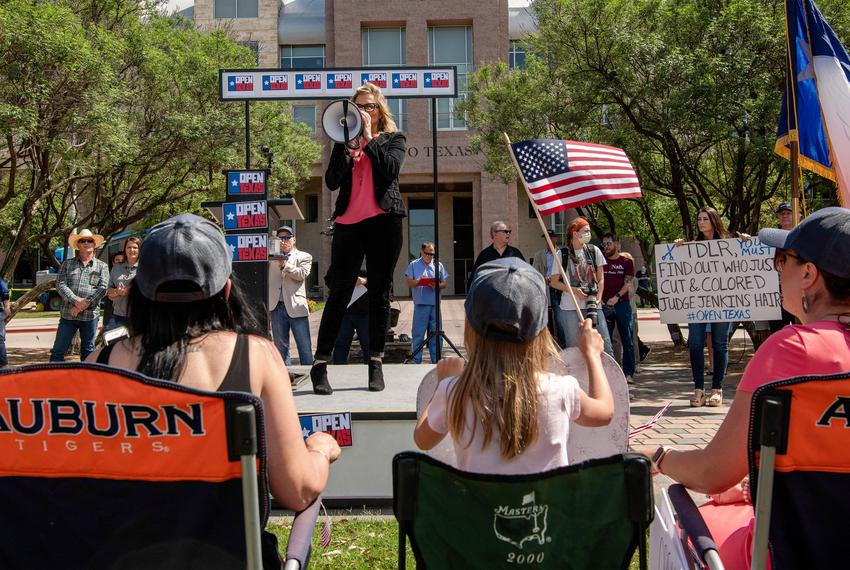 A pandemic policy that has swung between public health and the economy has a third leg now, with complainers inside and outside of public office arguing that government shutdown orders designed to slow the spread of the coronavirus violate civil liberties and might even be unconstitutional.

Their hair’s on fire — and they appear to be influencing policy.

Whether it’s Dallas hairstylist Shelly Luther, who turned an illegal reopening into a rallying cry, or a couple of conservative state lawmakers who decided that tweeting about their illicit haircuts would show their dismay with state policy and their love for good grooming, the expressions of frustration with almost two months of government-ordered social distancing were growing in volume.

Just last week, Gov. Greg Abbott unfurled the first phase of his plan to reopen the Texas economy. He would allow limited openings of stores, restaurants and movie theaters, but he wanted to go slowly enough to make sure he wasn’t letting the pandemic run loose. Some health experts were nervous, while others were cautiously optimistic. Abbott said he would wait a couple of weeks to reconsider ending other restrictions.

Just four days after those first openings, he was back to expand on them, saying hairstyling and cuts would be allowed, along with swimming pools, and that gyms and other businesses would follow.

Abbott has been attempting to find middle ground between constituents whose first interest is safety from the coronavirus and those who want to unshackle the Texas economy.

Others have been pushing for a return to pre-pandemic Texas. Lt. Gov. Dan Patrick unveiled a 113-page report from what he called his “Texans back to work task force.” One of the stated goals was to recommend ways to “safely and effectively reopen and restore our Texas economy to 100% in the not too distant future.”

Keeping people safe — or not — raised the ire of Dennis Bonnen, the Republican speaker of the Texas House. In a rapid-fire series of tweets Monday, he accused some big retailers of ignoring the safety of customers, saying walking through their stores was like “navigating a germ pool.”

Let’s call that the minority report.

The trend of the week is haircuts, swimming pools and a general tone of taking our collective feet off of the brakes.

Republican state Reps. Briscoe Cain of Deer Park and Steve Toth of The Woodlands crossed the barricades this week to get illegal haircuts in defiance of the governor. Cain could have been prepping for a court appearance: He’s one of Luther’s lawyers.

This one didn’t: Luther, the Dallas hairstylist, ripped up a judge’s order that told her to desist from what the governor’s own pandemic orders had defined as a nonessential business. Abbott said she shouldn’t have been jailed.

The governor, a former state attorney general and onetime Texas Supreme Court justice, was publicly defending a lawbreaker who tore up a judge’s order and got thrown in jail for it.

He didn’t stop there. On Thursday, the governor revised his pandemic orders to say they can’t be used to jail people and backdated the changes to early April. That wasn’t enough to free Luther, who was actually jailed for contempt of court, but the Texas Supreme Court ruled later in the day to let her out.

It is hard to argue for jail time, especially when Texas jails are releasing other nonviolent lawbreakers to protect them from being incarcerated in group settings during a pandemic. Maybe state District Judge Eric Moyé should have sentenced her to give free haircuts at the county jail or work at a food bank for a week.

But it’s hard to argue that nothing should happen, especially because the governor’s own executive order is the one that didn’t have Salon a la Mode and businesses like it classified as essential. When she opened her shop, Luther wasn’t defying the judge; she was defying the governor.

She’s not the only Texas beautician arrested for tending to customers during the pandemic — just the one who got the attention of the top politicians in Austin. Consider the story of two women in Laredo busted in April for offering nail and eyelash services in violation of pandemic-spurred restrictions. Ana Isabel Castro-Garcia was arrested by Laredo police after arranging to do the nails of an undercover cop posing as a customer. Brenda Stephanie Mata was arrested for a similar transgression, offering eyelash services to an undercover officer. Nails and lashes weren’t on the list of essential services under that city’s “COVID-19 Emergency Management Plan.”

Illegal grooming is hardly of interest to the average neighborhood crime watch or the FBI — whether it takes place in Laredo or in Dallas — but the law is the law.

Maybe it’s a big-city thing. State officials got after Harris County Judge Lina Hidalgo for a mandatory mask law that included fines for violators caught without masks in public. That furor also didn’t reach Laredo, where state officials had ignored a similar law for weeks. Maybe state officials just don’t pay attention to Laredo, or the Houston masks and the Dallas hair were just convenient attention-getting distractions for stressed-out politicians in the middle of a scary pandemic.

Whatever the case, salons can reopen in Texas on Friday to 25% of their regular capacity, freeing the state’s politicians to argue about other essentials.

The article was published at Analysis: Splitting hairs in Texas, for politics and profit.