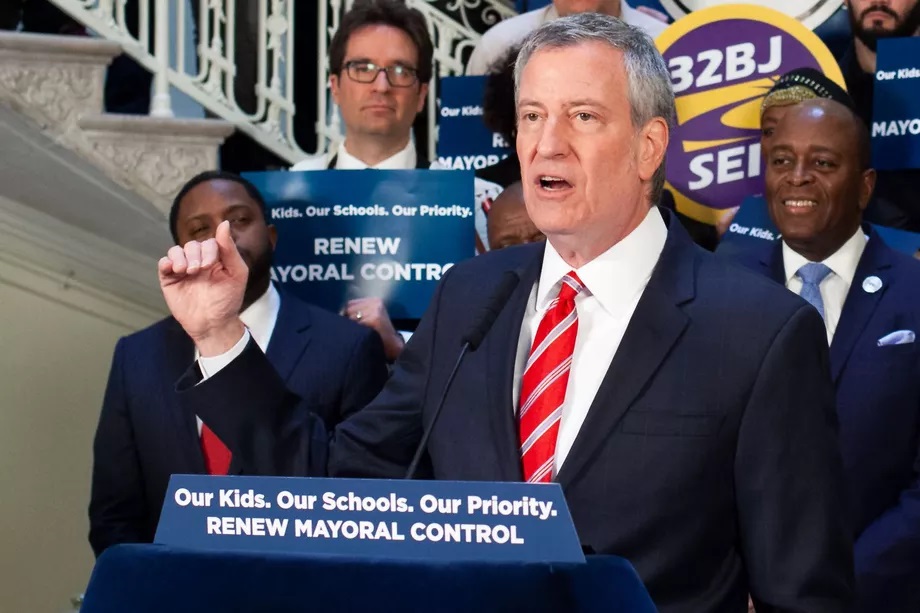 This story was originally published by Chalkbeat, a nonprofit news organization covering public education. Sign up for their newsletters here: ckbe.at/newsletters.

As New York City hurtles toward a Sept. 10 school start date, the unions representing both school administrators and teachers are asking the city to delay the start of in-person school until the end of September.

Meanwhile, a group of Brooklyn school leaders outlined a proposal to phase-in building reopenings to allow more time to plan.

Opening in less than one month ignores “dire warnings” from principals and would “disregard” the “well-being of our school communities,” Mark Cannizzaro, president of the Council of School Supervisors and Administrators wrote Wednesday to Mayor Bill de Blasio and Schools Chancellor Richard Carranza.

The union, which the city has regularly consulted on its fall scheduling, said last month that the planning process had an “alarming lack of direction.”

Schools must submit their individual plans by Friday and then wait for approval, which could mean less than 15 working days to prepare for the arrival of students, Cannizzaro said.

On top of that, they are still waiting for guidance for many details about reopening, making the task impossible to complete while also providing assurances that their buildings are safe.

“Regrettably, the city started the planning process far too late for them to have any faith or confidence that they can reopen their buildings on September 10th,” Cannizzaro wrote. “Especially given that teachers do not report until September 8th, allowing frighteningly little time for the preparation and training necessary for these unprecedented circumstances.”

Separately, nearly three dozen principals in Brooklyn’s District 15 asked the city to phase-in the reopening of schools, starting with a remote-only schedule, according to a letter they addressed to de Blasio, Carranza and Gov. Andrew Cuomo.

The Brooklyn principals are calling to have students learn from home through Sept. 18, with pre-recorded lessons only, to give staff time to learn new safety protocols and practice safety procedures, set up and inspect classrooms, and ensure that promised building improvements have actually been made.

Schools would also use this time to train staff on trauma-informed instruction. Then, from Sept. 21 to Oct. 18, they would phase-in the children opting for the mix of in-person and at-home learning.

“We are gravely concerned that the central response to opening has been piecemeal,” the letter stated. “The COVID-19 funding provided to schools is completely inadequate to address the challenges we face. Our schools need immediate answers, a clear blueprint, and the resources to move forward safely.”

The principals said they have little information on how key scheduling challenges will be met, such as how to program their hybrid schedules for students with disabilities or those learning English as a new language.

Some schools with more resources are trying to negotiate using outdoor space and purchase extra personal protective equipment, for instance, while other schools are unable to do that, raising concerns about equity across the system, they wrote.

Getting answers to various specific questions — such as for health and safety, space usage, and academics — has even been tough for the district’s superintendent’s team, the letter said.

The city has held informational sessions with school leaders, have worked in concert with the unions representing educators, and has publicly posted their academic and health plans, as required by the state. Still, many of their concerns feel unheeded, school leaders said.

The teachers union agreed with its principal union counterparts.

“The UFT has said repeatedly that we cannot re-open schools unless they are safe for students and staff,” United Teachers Federation president Michael Mulgrew said in a statement. “Will any parents be willing to put their children in a school whose principal believes the building is not ready to open because it is not safe?”

Mayor Bill de Blasio pushed back on the unions’ calls to delay in-person reopening, noting that he has spoken recently with Mulgrew and Cannizzaro and was working to address their concerns. Unions “will always sound various alarms [and] say things, sometimes, in a very dramatic fashion,” he said.

“If you want to take away another month of a kid’s education, you can do that, but that’s that’s not where I start,” de Blasio said after he toured Village Academy in Far Rockaway on Wednesday afternoon to observe the measures taken to ensure social distancing. “Let’s start with the valid concerns that teachers and administrators are raising with a whole month to go.”

There, Principal Doris C. Lee told reporters she had some “clear systems and structures” in place to reopen and has enjoyed support from her superintendent and her district’s borough office.

But school leaders and communities in other parts of the city are echoing concerns similar to the unions about the start date.

Manhattan’s Urban Assembly Maker Academy drafted a detailed proposal to phase in groups of students over six weeks, allowing for those not in school to continue learning remotely only. Instruction during the first phases would focus on social emotional learning and community building, only moving to academic content several weeks in.

As long as indoor dining is prohibited, the school would not allow students to eat indoors either, according to the lengthy proposal. To bring anyone back in the building, staff would have to check off on an extensive list of “prerequisites,” to ensure no one is experiencing coronavirus symptoms.

The school is demanding not only clear guidance on how testing and tracing will work, but also a reliable data sharing plan among the schools it shares a building with. The city has mapped out various scenarios that would trigger the closure of classrooms or school buildings if someone tests positive for the virus, but educators say they need more details.

Roughly 76% of the school’s students are Black and Hispanic, and its proposal notes that COVID-19 has disproportionately affected communities of color. But school leaders don’t feel they have enough data to help guide their reopening in a way that is safe or community-driven for their families, which is one reason why they want more time.

They hope their proposal could be a model for others. Manhattan Borough President Gale Brewer endorsed the plan and sent it to other principals in Manhattan, the school said.

“While the proposal will need to evolve and draw specifics from each school’s unique context, we hope that it can be adapted for use throughout NYC public schools, whenever we eventually begin to reopen,” the school community wrote. “Any safe reopening of schools must center the specific needs of populations who will be disproportionately harmed by COVID spread.”

Principals have largely been trying to pick a hybrid schedule without having some key data, such as how many families will opt for a fully remote schedule or how many teachers will request to work from home, until this week.

The city this week announced that 264,000 district students, or 26%, have so far chosen to learn exclusively from home in the fall, and 15% of teachers have requested medical accommodations.

Some principals, especially of large, overcrowded schools, worry how they will staff classes in-person as well as virtually, given a hiring freeze and budget constraints.

For instance, there might be no biology teacher available for students who are fully or partially remote, while no algebra teachers might be available for in-person instruction. Or a school might not have a third grade teacher working remotely, so they might need to tap their music teacher to fill that gap.

“As you know, teachers cannot be in two places at once,” said Moses Ojeda, principal of Thomas A. Edison Career and Technical Education High School in Queens, during a discussion about reopening plans on WNYC’s The Brian Lehrer Show.

Even if they have figured out a schedule that works in terms of their student enrollment and building space constraints —to allow for six feet of social distancing — some school leaders are worried about what happens if staff gets sick during the school year.

Principals can bring in substitutes or staff from the city’s Absent Teacher Reserve, but it could be a financial and logistical challenge to do so especially as they might need someone for a specific content area.

Ojeda and two other principals, both in the Bronx, told Lehrer that they supported a delay in opening. Students would still learn remotely while school leaders have more time to game out what in-person schedules would look like, they said.

“Time does not have to be our enemy, it can actually be an ally,” said Roshone Ault Lee, principal and founder of South Bronx Academy for Applied Media. “So, if we delay the start of school and we are able to strategically plan and think through and mitigate all the challenges, it will be beneficial for everyone.”