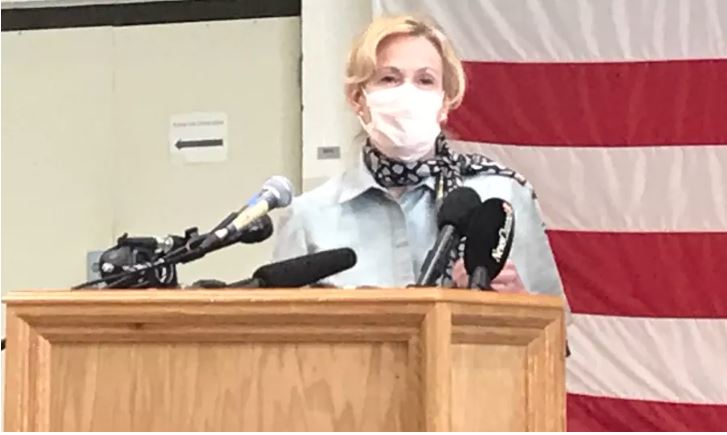 While COVID hotspots in cities such as New York and Los Angeles made headlines and ushered in a nationwide school shutdown this spring, the spread of the coronavirus in rural America marks a new phase of the public health crisis as schools try to reopen this fall.

The steady creep of cases beyond big cities and their bedroom communities is among the troubling trends prompting White House adviser Dr. Deborah Birx to visit Southern and Midwestern states this month to encourage safety measures.

Tennessee is a primarily rural state where most residents aren’t wearing masks — and aren’t necessarily being told to — despite scientific evidence showing that face coverings help mitigate spread.

On Monday, Birx visited Tennessee with a simple message: If you want students back in school and businesses to remain open, wear a mask, stay socially distanced, wash your hands frequently, and avoid high-risk activities, even if you live in a community with fewer cases.

“I really came to talk to the governor about how important it was for every rural Tennessean to wear a mask. It is in all of your rural counties,” she said of COVID-19.

Birx, who is among the top coronavirus officials in the nation, came to Nashville to speak with Gov. Bill Lee and other state and local leaders. She made similar stops over the weekend in Kentucky and also Ohio, where she called out several cities with an increase in COVID cases. And earlier this month, she traveled to Mississippi.

The highly contagious respiratory virus has reached all of Tennessee’s 95 counties, a trend she called “most concerning” — and similar to broad spreads happening across Texas, Alabama, Mississippi, Florida, and Arizona. The growth, she said, can be traced mostly to people under age 35 who are asymptomatic and unknowingly spreading the virus to others.

Birx said Tennesseans who ignore the research about face coverings make it harder for educators working to bring students back onto campuses in a state where a third of students attend rural schools.

Even so, she did not question Lee’s stance on mask-wearing. While the Republican governor has urged Tennesseans to wear face coverings, he has declined to issue a statewide mandate. Instead, Lee has authorized mayors to order them locally.

“In this case, we know that the rural mayors understand their communities the best,” Birx said, echoing Lee’s position.

Asked if she recommends that Tennessee districts start the school year remotely if cases continue to climb in their communities, Birx was careful to avoid undercutting Lee. His administration continues to urge districts to reopen in person if possible.

“Each school district is going to have to look at this … because each county is different,” she said.

Birx recommended that local education and health leaders conduct their own analysis and make their own call about when and how to reopen schools. “We’re essentially saying that every school district has to understand public health,” she said.

Her comments came just hours after the school superintendent in Memphis announced that the state’s largest district will start the academic year virtually, just like students in Metropolitan Nashville Public Schools. The two districts are the state’s largest and represent almost a fifth of Tennessee’s 1 million public school students.

Leaders of the state’s other 145 school districts have announced a hodgepodge of reopening plans, most including in-person instruction, especially for rural areas. Some are letting parents choose either online or in-person classes.

This post COVID is not just an urban problem, says White House adviser about virus spread in rural Tennessee as school start approaches were published by Chalkbeat.