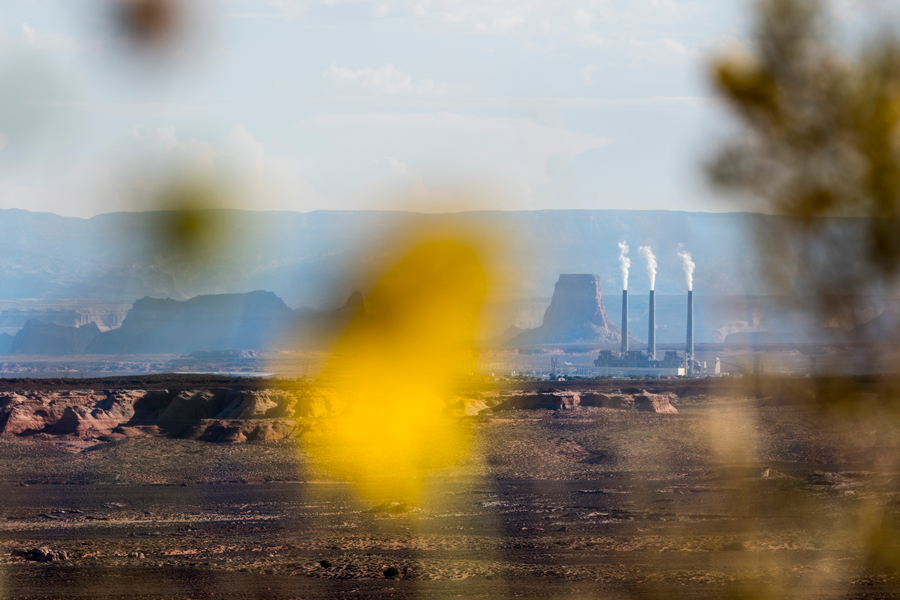 For 27 years, Erwin Marks helped design military aircraft, missiles, drones and even solid rocket boosters for the space shuttle. The work was a good fit for Marks, who’d left the Navajo Nation to study design engineering technology at Brigham Young University in the 1980s. But after almost three decades, Marks had grown tired of the hiring and layoff cycles every few years as federal contracts were awarded and expired.

“There’s a lot of ups and downs,” Marks said of aerospace manufacturing. “I wanted to get into something that was more stable.”

When he was offered a maintenance planning position at Navajo Generating Station, a coal-fired power plant outside Page, Arizona, in 2014, Marks took it. Not only would the job put him closer to where he grew up and near his siblings, he thought it might be the last time he would have to look for new work.

“This is probably the first three years in my career I haven’t gone through a layoff,” he said.

But earlier this year, Marks’ future was thrown into upheaval again.

Help AZCIR do more to keep you informed.DONATE

In June, Salt River Project, the main owners of NGS, announced that, after 40 years of operation, the plant will be shut down. It will take years to complete the planned decommissioning, but community leaders expect the impact will be severe.

SRP executives have said they will try to relocate willing NGS employees to other SRP workplaces in the state. But for Marks, that would mean having to move again, away from his family and the place he calls home.

The closure of NGS signals the direction of America’s energy market: away from coal, and toward cheaper, cleaner-burning natural gas. But the shutdown also fits into a longstanding context of poverty and isolation for Native Americans, particularly in Arizona.

Erwin Marks is facing the prospect of yet another relocation if and when Navajo Generating Station closes down. (Photo by Nick Oza)

The poverty rate in the Navajo Nation is 42 percent, more than double that of Mississippi, the worst among the 50 states. Navajo unemployment is 22 percent, more than four times the rate of Arizona as a whole, and roughly three times that of Alaska, the state with the highest unemployment. Almost half of Navajo households and more than one-third of Hopi households have an income below $25,000, and barely 1 in 5 Navajo adults holds a full-time job.

Marks and hundreds of other NGS employees will face a choice: Relocate, moving away from their families and homes, in order to keep a high-paying job, or look for new work in an area with few jobs and hardly any infrastructure to support economic growth.

Beyond its effects on individuals, the plant’s closure is expected to have a dramatic impact on the revenues of the area’s tribes.

Through lease agreements and royalties, Navajo Generating Station accounts for roughly a quarter of the revenue the Navajo Nation collects each year. Similarly, the coal mine 70 miles to the east, which provides the fuel for NGS, accounts for two-thirds of the total revenue for the neighboring Hopi Tribe.

Local leaders have some ideas for how to mitigate the loss of such a sizable portion of the area’s economy. But no concrete plans have been made ― and certainly nothing that would immediately replace what NGS has provided to the region for decades.

By the 1950s and 1960s, Arizona’s population was poised for growth. Mild winters, cheap land and abundant natural resources drew people and business. But if the state was truly going to grow, ambitious water management would be a prerequisite.

To ensure steady access to water, a team of politicians and engineers devised the Central Arizona Project, an immense water diversion system that now pumps water from the Colorado River, uphill, across hundreds of miles of the Sonoran Desert, wrapping around the Phoenix metropolitan area before turning south toward Tucson. CAP also needed cheap, reliable energy. The vast coal deposits discovered around the same time near Black Mesa in northeastern Arizona led planners to the final piece of the equation: Navajo Generating Station.

In 1966, Peabody Coal was granted the right to begin mining the coal-rich area around Kayenta. But around the same time, a simmering dispute between the Navajo Nation and the Hopi Tribe over land along their border came to a head. Federal lawsuits between the tribes resulted in a “joint use area” in the disputed land. In an attempt to spur negotiations between the two tribes, and to allow coal mining to move forward without impediment, Robert Bennett, then the U.S. Commissioner of Indian Affairs, established a ban on any development or repairs in disputed land. This came to be known as the “Bennett Freeze,” and although the stated goal was to inspire a negotiation, the dispute was not settled for 40 years ― leaving people in the area unable to build new infrastructure or even repair existing structures.https://evanwyloge.carto.com/builder/c3a953b2-af30-447a-a646-111065a30ee8/embed

The deference toward Peabody Coal’s interests, coupled with the severe restrictions on infrastructure projects, meant that Native Americans in the region were essentially rendered bystanders during the extraction of lucrative fossil fuels ― an outcome that some historians argue was far from accidental. Whether or not that was the goal, practically all observers agree the effect was devastating for both tribes.

Jack Jackson Jr., a former Arizona state senator and the current director of tribal engagement for U.S. Rep. Tom O’Halleran (D-Ariz.), grew up on the Navajo reservation. He says that while the development ban came with assurances of future investment by the federal government, the negative consequences were far-reaching.

“The federal government knew about the coal reserves in that area, in Black Mesa, where Navajo folks had lived for centuries,” Jackson said. “Ultimately, hundreds of Navajo families were forced to move off their homelands. And they were promised housing, paved roads, jobs, better communities with grocery stores. They built some homes, but they didn’t have water or electricity infrastructure. So, these homes had water pipes sitting idle for 50 years.”

The Bennett Freeze barred communities from building roads, schools or hospitals, making it impossible to attract any industry outside of the established fossil fuel interests. As a result, NGS and the coal mine that supported it were effectively the only opportunities for high-paying, full-time jobs.

That makes the prospect of an NGS closure all the more dire.

The article was published at As Coal Plant Shutdown Looms, Arizona’s Navajos And Hopis Look For Economic Solutions.