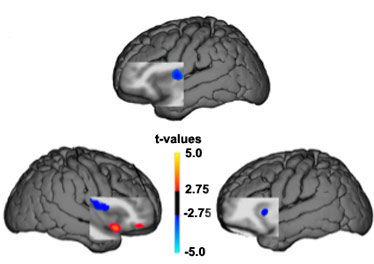 A detailed brain imaging study of people with Williams syndrome, a developmental disorder characterized by a highly sociable personality, has found a series of structural, functional and connectivity deficits that converge on a part of the brain called the insula1.

This particular neural profile can distinguish people with Williams syndrome from those who have other developmental disorders with 90 percent specificity, says Karen Berman, chief of the Section on Integrative Neuroimaging at the National Institute of Mental Health and senior scientist on the study.

Indeed, the greater the disruption to the insula, the stronger the so-called Williams syndrome personality, which is highly empathetic as well as social. The findings, published online 12 March in the Proceedings of the National Academy of Sciences, could help shed light on how abnormal connections in the brain lead to such unique social behaviors.

“This is the first study to look at the structure and connectivity of the insula in this particular population,” says Helen Tager-Flusberg, professor of psychology at Boston University and president of the International Society for Autism Research, who was not involved in the research. “The findings are particularly interesting given its putative role in integrating social and affective [or emotional] information.”

Williams syndrome results from a deletion of approximately 25 genes on chromosome 7. It is sometimes thought of as the opposite of autism because of the gregarious and highly verbal nature of people with the disorder.

The two disorders share some symptoms, however. In addition to anxiety, individuals with autism and those with Williams syndrome have developmental delay and trouble maintaining long-term relationships. What’s more, a study published in 2010 found that people with a duplication of the region that is deleted in Williams syndrome have language and social difficulties similar to those in autism.

Understanding the role these genes play in the brain might help untangle the social deficits seen in autism.

The unique personality profile found in people with Williams syndrome provides “a very special circumstance to try to understand how genes work through the brain to make us who we are,” says Berman.

Berman’s team used several types of imaging to look at the insula, part of the brain that has been linked to interoception — the ability to sense stimuli outside the body — empathy and self-awareness, and its network of connections.

Mapping this part of the brain has proven challenging in the past, in part because it is buried in the deepest part of the cerebral cortex.

“It has been relatively understudied compared with other regions in the brain network called the ‘social brain,’ in Williams syndrome, but also in autism,” says Tager-Flusberg.

In the new study, researchers used a combination of structural MRI to define anatomy, diffusion tensor imaging (DTI) to analyze white matter — the connections between neurons — and positron emission tomography (PET) to assess regional blood flow, an indirect measure of function and metabolism, in different parts of the brain.

They studied 13 people with Williams syndrome and 23 controls, only a subset of whom participated in each of the various imaging modalities.

It’s only recently that newer techniques, such as DTI and functional connectivity, which infers connectivity based on correlated activity of different brain regions, have become reliable enough to be used more widely, says Paul Thompson, professor of neurology at the University of California, Los Angeles, who was not involved in the study.

The study is unique not only in its target and combination of imaging technologies, but in the population under study. Berman’s team chose to focus only on individuals who have Williams syndrome and a normal IQ, a relatively small percentage of people with this rare disorder, to eliminate the possible effects of IQ.

Individuals with Williams syndrome have differences in brain structure, connectivity and function compared with controls, the study found. Specifically, the researchers found that the gray matter of the dorsal anterior insula, a region associated with integrating emotions and cognition, is smaller in people with the disorder, while the ventral anterior insula, an area implicated in social and emotional processes, is larger.

Perhaps most significant, the degree of alteration is linked to the magnitude of the individual’s Williams syndrome personality, as measured by a personality test.

The link between personality traits and the insula is specific: Researchers did not find a similar correlation with the hippocampus, part of the brain involved in learning and memory. And verbal IQ, which is unrelated to personality, was not linked to changes in the insula.

Little is known about the role of the insula in autism, though previous brain imaging studies have shown that part of it is underactive in people with autism when they are doing social tasks.

Berman and her collaborators next plan to study the rare group of people who carry a duplication of the Williams syndrome region on chromosome 7.

“If you have only one copy [of this section of DNA], you have Williams syndrome and are highly social. With two copies, you’re normal, and with three copies, you have something that looks like autism,” says Berman. “It’s an interesting story of how gene dosage affects the brain and creates very different behaviors.”

Tager-Flusberg hopes that the new study will draw more interest among autism researchers to this part of the brain. “Based on these findings, I think it would be very interesting to see what we find in [people with autism], who are socially under-responsive,” she says.

Having such a specific profile of what’s gone awry in the brain might aid in the development of treatments for Williams syndrome or for other developmental disorders involving the social brain, including autism.

“We now have suspects in the brain for targeting therapies,” says Thompson, “We can look at different ways of helping kids learn and see if abnormalities can be put back on the right track.”