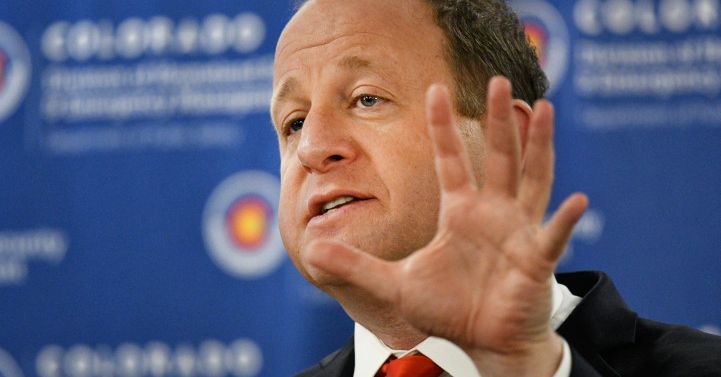 Colorado Gov. Jared Polis said he won’t sign onto a law that would raise $248 million next year for the state and its K-12 education system, but could have impacts to state businesses, without first negotiating revisions.

The Fair Tax Act bill, which passed the House on Thursday, would make changes to Colorado tax code by cutting certain tax deductions for businesses and the wealthy. The greater Colorado business community opposes the measure, which they say would hinder business recovery from the coronavirus downturn.

“I don’t yet see a route for how that tax bill could become law,” Polis said in response to a question about whether he would veto the bill. “There would obviously need to be a negotiation with us; there hasn’t been in the last few days. We remain open to the negotiation.”

Polis said any tax code changes need to be good for jobs and business. Polis’ opposition to the proposal was first reported by Colorado Politics.

Democratic lawmakers introduced the bill in the final week of an abbreviated legislative session. The sponsors say the changes would raise much-needed funds for statewide K-12 education. The state is facing a $3.3 billion shortfall in general fund revenue next year, and the Public School Finance Act that passed the Senate Thursday reduces per-student spending by 5% along with cutting millions in grant programs. The following year is expected to be even worse.

During an emotional floor debate, Republicans said Democrats could have found more money for education if they’d cut other programs more, while Democrats defended, sometimes through tears, the painful tradeoffs in the budget. Education advocacy groups have pushed lawmakers to find new revenue rather than only cutting.Become a Chalkbeat sponsor

That’s where the proposed tax code changes come in.

Next year, the changes would raise up to $248 million for the state, according to a legislative analysis. The year after, the state would bring in another $408 million, and millions more in subsequent years.

A majority of that money would benefit the state’s education fund, starting with $175 million in the 2021-22 year, according to an amended bill. In total, the state would send $1 billion to education if the bill becomes law.

Rep. Matt Gray, a Broomfield Democrat and co-sponsor of the bill, said in an email responding to Polis’ remarks that he would continue conversations with the governor.

“These aren’t easy times for anyone, but if we don’t act to protect our schools, we’ll see our teachers suffer and a generation of students face a lower-quality education because we lacked the courage to do something about it,” he said. “Automatically adopting the tax ideas from Washington that favor wealthier people is a lower priority to me than our teachers and students.”

Proponents of the bill, including tax reform groups and education unions, have said the bill prevents the worst of cuts to schools.

“I think there’s agreement on both sides of this divide that low- and middle-income Coloradans need relief,” Wasserman said. “The tension is over whether or not the state’s top earners need that same kind of tax relief given the massive inequality in our tax system. We just don’t think that makes sense right now. I hope we can figure this out.”

Democratic lawmakers have also said the benefits of the tax code changes outweigh the strain it might place on the wealthy and large businesses.

Business leaders, however, worry the removal of the tax credits could have wide-ranging impacts and slow the recovery from the coronavirus shutdowns.

Rep. Emily Sirota, a Denver Democrat and bill co-sponsor, said the aim is to target tax credits that benefit largely corporations and the wealthy under the federal Tax Cuts and Jobs Act of 2017 and within the coronavirus relief bill.

“We need to make a choice; we can either give taxpayer-funded handouts to corporations and wealthy individuals who don’t need them, or we can protect our students and underpaid teachers,” Sirota said in a news release. “Colorado can’t afford to follow politicians in Washington who want companies making $25 million or more to get economic relief while our schools struggle to retain teachers.”

The bill goes next to the Senate. Lawmakers have said they hope to finish their work by Saturday.

The article was published at Colorado tax code change to raise millions for K-12 education advances, but Polis says he won’t support without revisions.