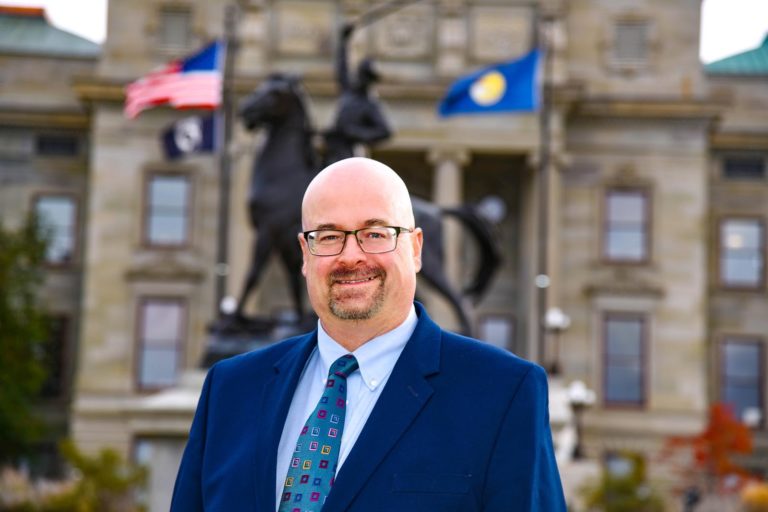 Republican candidate for Secretary of State Bowen Greenwood says if he’s elected one of his first priorities will be to increase voter registration across the state.

As Greenwood tells Montana Free Press editor-in-chief John S. Adams: “The state’s elections office can be operated as a neutral party, and go out to fairs, college campuses, everywhere, and register voters in a way that’s not about an advantage for one side or the other.”

Greenwood, who was elected Clerk of the Montana Supreme Court in 2018, has been a key player in conservative political circles for many years. Prior to his election — in which he defeated Democrat Rex Renk by more than 40,000 votes — Greenwood has served as public information officer for the Public Service Commission, spokesman for the Montana Family Foundation, and executive director of the Montana Republican Party. Greenwood began his professional career in Montana politics in 2006 as communications director for former Republican Secretary of State Brad Johnson.

While the clerk position carries a six-year term, Greenwood has set his sights on the Secretary of State’s office amidst his concerns over election security in the age of hacking and foreign interference. Greenwood says he would place a particular focus on the state’s paper ballot system.

“Cybersecurity is so much more important these days,” Greenwood tells Adams, adding, “I am very much in favor of bringing an ID to vote.”

Some Montanans may remember Greenwood from his days as a conservative blogger in the mid- to late-2000s. Writing under the pen name NeoMadison, Greenwood was once on the front lines of the often fiery political discourse that took place on the internet before the rise of social media sites like Twitter and Facebook. Reflecting on that period of his life, Greenwood says a 2012 spiritual encounter set him on a different rhetorical path.

“I don’t want to be that guy anymore,” says Greenwood. “I try to treat people on all sides of the aisle, understanding that they’re a creation of God, that this Democrat, this progressive, God wants them in Heaven as much as he wants me in Heaven, and they’re worthy; they’re worthy of my time and listening and respect.”Greenwood is running in the Republican primary against Senate President Scott Sales of Bozeman, current Deputy Secretary of State Christi Jacobsen, and State Rep. Forrest Mandeville. The lone Democratic candidate is Missoula state Sen. Bryce Bennett. Incumbent Secretary of State Corey Stapleton is seeking the Republican nomination for Montana’s U.S. House seat. Greenwood’s comments came during a recent interview on the Montana Lowdown podcast, a weekly publication of the Montana Free Press.

The article was published at Secretary of State candidate Bowen Greenwood.