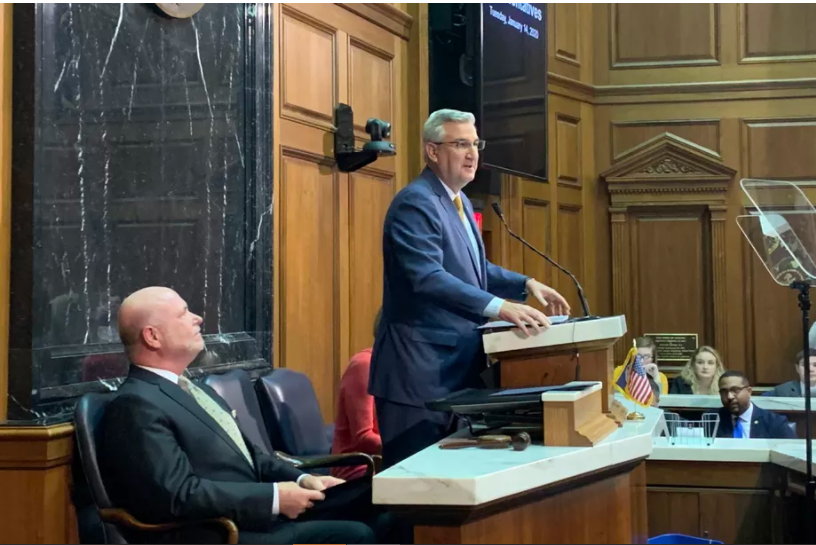 Indiana Gov. Eric Holcomb pledged to free up $50 million for schools in 2021 during his State of the State address Tuesday night — an unusually early announcement that comes as he faces pressure and criticism from teachers.

The state would tap into its more than $2 billion in reserves to pay down the state’s teacher retirement fund under Holcomb’s proposal. In turn, the one-time $250 million payment would leave the state with an additional $50 million a year going forward, which Holcomb said he wants to go toward teacher pay.

The plan appears to be Holcomb’s response to mounting pressure from teachers, after thousands rallied at the statehouse in November. The Republican governor, who is running for re-election this year, initially said he would wait to tackle the issue until his teacher pay commission produces a report this spring, after the legislative session ends.

But teachers would still have to wait. While Republicans plan to spend some of the state’s surplus this year on previously approved higher education construction projects, Holcomb held fast that spending this surplus money for schools would have to wait until the state’s budget is opened next year.

“I am disappointed Indiana continues to delay necessary action,” said State Superintendent Jennifer McCormick in a statement after the address. “Insufficient school funding resulting in inadequate teacher compensation impacts 1.1 million students, 78,000 Hoosier educators, and the future of our great state. Students cannot afford to lose more great educators while Indiana decides if we can afford them.”

Teacher pay has become a top issue in Indiana, which trails neighboring states in teacher compensation. In 2016-17, Indiana teachers made an average salary of $50,554, according to the National Center for Education Statistics, but starting salaries can be as low as $30,000.

Tuesday’s proposal is similar to what Holcomb and lawmakers did last year, when the state used $150 million of its reserves to pay down a pension liability to reduce schools’ expenses statewide by about $65 million a year for two years.

“Together, that’s $115 million more available annually to increase teacher pay with more to come after the compensation commission releases its recommendations,” Holcomb said.

This new plan could also face similar criticisms — it leaves additional money to the state’s general fund but doesn’t require money to go to teachers. The $50 million per year would equate to relatively small raises for Indiana’s roughly 70,000 public school teachers. Lawmakers previously estimated it would cost $315 million to raise educators’ salaries by 5% over two years.

Republican House Speaker Brian Bosma called the approach “sound fiscal policy,” saying lawmakers are taking a careful approach by waiting until 2021 to make sure the state is prepared for a potential downturn in the economy.

As for the other education issues lawmakers will address this year, Holcomb listed priorities Republicans have touted before: eliminate unnecessary paperwork and unfunded requirements for schools, make a 15-hour externship optional for teachers renewing their license, and hold schools harmless from low ILEARN scores for two years.

The article was published at Holcomb pledges to spend $250M from surplus in 2021 to increase Indiana school funding.