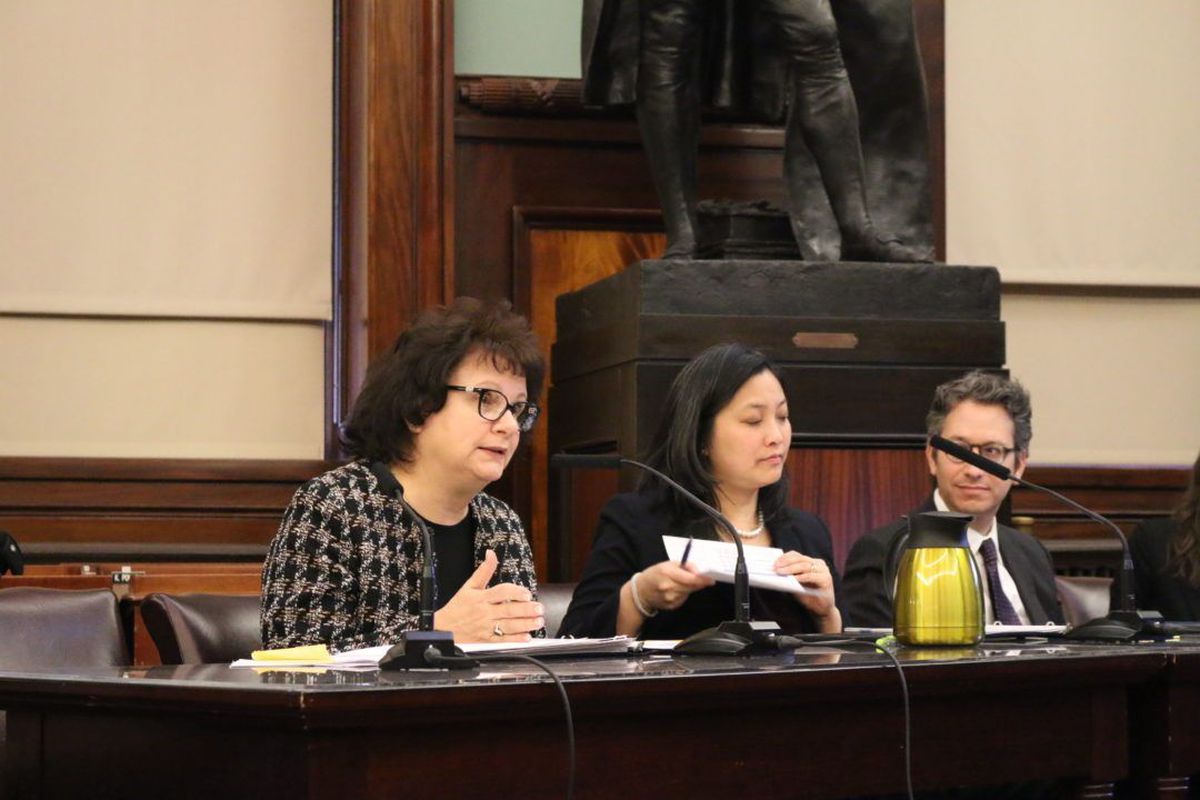 This is part of an ongoing collaborative series between Chalkbeat and THE CITY investigating learning differences, special education and other education challenges in city schools.

When Corinne Rello-Anselmi began her public school career 41 years ago, her students were secluded, expectations were low, and her principal didn’t pay much attention to the quality of instruction in her Bronx classroom.

She officially stepped down from that post last week, closing out a career of working to improve a system whose flaws she knew first hand. In recent years, she was responsible for overseeing a massive shift toward including students with disabilities in mainstream classrooms and schools, a process that advocates have supported but which schools have often struggled to embrace.

On her penultimate day on the job, Chalkbeat caught up with Rello-Anselmi to talk about her legacy and some of the system’s ongoing challenges, including gaps in providing mandated services, lack of appropriate instruction for students who struggle with reading, and the rise in the number of parents who are suing the city to cover private school tuition for their children with special needs.

This interview has been edited for length and clarity.﻿

You started your career in education 41 years ago, which is a time that you have referred to as the “dark ages” for special education. What do you mean by that, and is there a change you’re proudest of accomplishing?

I began with the DOE as a self-contained special education teacher that was siloed from every aspect of being part of the school community.

The principal of the school had very little commitment to what was happening in the special education unit, or was really not held responsible for the outcomes of the kids or to make any attempt to have that community of kids feel part of the larger school community. [Instruction] was taught at a functional level that took curricula and watered it down to such an extent that the students, the gap in terms of learning, only grew.

I had a fifth grade class of 15-year-old boys because at the time we were repeatedly holding [back] special education students. And what we were doing socially and emotionally to the kids was more damaging than anything in terms of having them feel that there was a reason to come to school, that people cared about them, and that we cared about their futures — and I think that’s the biggest change.

You oversaw sweeping reforms that require all schools to serve students with students with disabilities. Nearly a decade on, what is your assessment of that effort?

The biggest challenge of the reforms over the past eight years was the mindset shift around inclusion and the benefit of inclusion, not only to the student, but to the total school community. If we talk about diversity and equity and excellence, we’re really talking about what this shared path stood for.

We’ve pushed specially designed instruction, the use of data — things that we would do for every child, but that are imperative for a child who is a struggling learner. We really need to understand why that child is struggling, what we need to do, how we can support them, both socially emotionally and academically.
That’s been the focus of this work.

Schools are now required to serve a broader range of students, but may have to learn how to provide new services. We ran an essay by a mom whose son had gotten into Brooklyn Tech, but was dissuaded by the school’s lack of special education offerings. What can the city do to improve access for students at schools like that?

I am very aware of the case that you speak about, and I was very very heavily involved when we started to ask specialized high schools to include students with IEPs [individual learning programs for students with disabilities].

We are working with schools to start to build out their program services to be more flexible in terms of their mindset and their support. We are addressing that day-by-day with our directors of special education, our professional learning, [so] that when a child wants to go to a specialized school like Brooklyn Tech that the school isn’t saying, ‘Oh, the IEP says ICT [a classroom with a mix of special education and general education students], so we can’t serve a child.’

It sounds like to some extent schools are still communicating to families, ‘We don’t offer the services listed on the IEP, and so it might be a challenge.’

But ultimately, we would always serve the child according to their IEP, if in the end everyone — parent, child, community — says this is the best option. We will make sure that the child gets the services as written on the IEP. This is a work in progress, it is not 100% yet, but I know schools are reaching out for the support in developing that model to address when those situations happen.

When we spoke recently, you mentioned that you were worried that students who struggle to read are too often labeled as in need of special education services. Why is that concerning to you?

We constantly are looking to see what causes us to have such a high referral rate for special education, and the classifications that we’ve looked at primarily right now are [learning disabilities], and speech and language.

When we look at the children, and we speak to the schools, it’s largely based on the fact that they have not reached proficiency in reading, certainly by second grade, but struggle to learn to read and are then referred to special education for support.

We’ve talked to parents who have felt like they weren’t getting exactly what you’re describing, and have ultimately sued the city for private school tuition. The city is spending over $500 million on those cases, and that seems to really benefit parents who have time and resources. Wouldn’t it be more equitable and potentially more cost effective if the city did a better job of running those programs themselves, so a broader range of people would have access to them?

Absolutely, and I think that’s what we’re attempting to do right now. This kind of conversation around literacy and print-based disabilities, I don’t think [we] would have had about five years ago. We have begun, especially over the last three years, to actively train teachers to look at the instruction within the classroom and I think under the structure that currently exists under the [chief academic officer] where we are looking and we’re partnering even closely with [the division of teaching and learning] to really look at strengthening the literacy programs within our schools.

Given those efforts, though, why do you think those numbers are going up — that the city is paying more out in those lawsuits, which include private school tuition, every year?

At this point, I can’t speculate. We strive to continue to grow our teachers’ expertise in this area. It is a systemic initiative that hasn’t really taken strong hold as of yet in every school, but it is a commitment of the system as we readily acknowledge that this is an area that we can address.

We recently opened up an inclusive ICT class with a focus on literacy that we’re piloting where the teachers are trained in Orton-Gillingham, and we have also opened up an intense program for students on the spectrum that are non-verbal. We are piloting different models, and we’re looking to become a little bit more innovative in terms of: Who are the students that we struggle to serve? What level of support would be necessary?

The special education system falls short in a number of ways: Over 15% of students aren’t getting all the services they’re entitled to. We’ve reported on delays in providing services or tuition reimbursements even when a hearing officer has ordered them. I know you’re working hard on these problems. Do you have an explanation of why there are these breakdowns?

I think I take a bit of exception in the way you’re portraying this because of the fact that with the City Council report and the data that we have been publishing very transparently, you see great strides in meeting the needs of program services and related services to students with IEPs.

There’s a lot that we are looking at in terms of why a child is not receiving their services.What we have learned since the publication of the first City Council report is that where there are shortage areas we need to work with the state in terms of the certification of teachers. We need to make sure we have enough providers — and that we have committed to. The city has committed to the additional hiring of psychologists. We have learned through our use of data and looking at school-by-school what is happening in terms of overall service of our students.

Now, on a realistic note, we want to be just more thoughtful in terms of the services our students receive — that they are benefiting that child. And we need to do a better job of when we engage parents and schools around service delivery models for students, what the child really needs, that we have the correct balance that affords that child the opportunity to be in that classroom learning alongside their peers, getting their services, and we are committed to that.

The article was published at What NYC’s Departing Special Education Chief Learned on the Job.