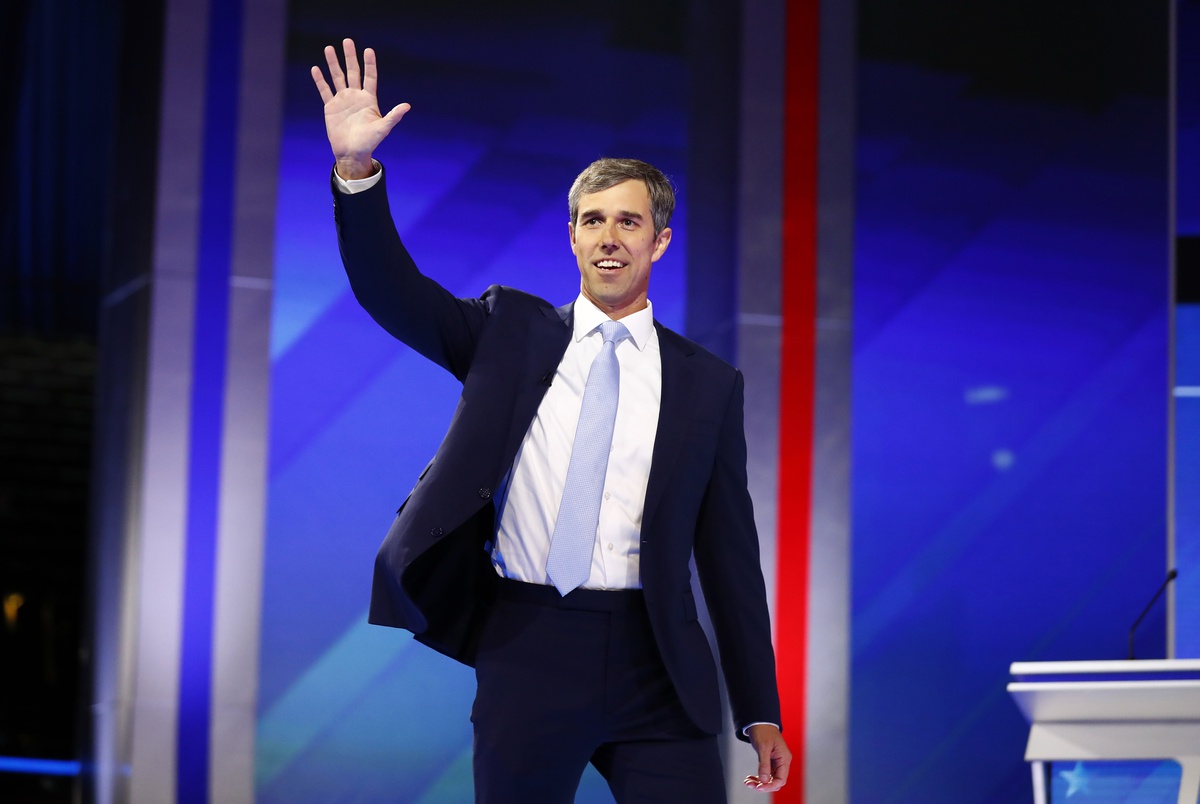 Beto O’Rourke may not be running for statewide office anymore, but it’s been difficult to tell in recent days.

The Democratic presidential candidate’s aggressive push for mandatory buybacks for assault weapons has upended the gun debate nationwide, but perhaps nowhere more dramatically thanin Texas, where both parties are grappling with internal divisions of varying degrees as they react to recent mass shootings in El Paso and Odessa. For Republicans, O’Rourke has proven a unifying foil as they fracture over whether to expand background checks. For Democrats, his proposal represents something of a new litmus test that is already reverberating down ballot.

The turmoil intensified Tuesday as two top Texas Republicans, Lt. Gov. Dan Patrick and U.S. Sen. John Cornyn, went to new lengths to blast O’Rourke over the idea even as the intra-GOP split over background checks became more pronounced than ever.

“He’s a gun confiscator — he’s done in our state,” Patrick said in a lengthy statement tearing into O’Rourke that he volunteered hours after clashing with longtime conservative ally Michael Quinn Sullivan over background checks.

Cornyn, meanwhile, told reporters that O’Rourke “has thrown gasoline on this discussion [to address gun violence], which had been proceeding along a pretty calm, logical and rational path” in Congress. “Unfortunately I think he set back the debate a lot — maybe by not just years but decades,” Cornyn added.

The political fracas has its roots in two pivotal moments since the El Paso shooting: Patrick coming out in support of extending background checks to gun sales between strangers, drawing the wrath of the National Rifle Association and other once-stalwart supporters; and O’Rourke backing mandatory buybacks of assault weapons, staking out arguably the furthest-left position on guns in the presidential primary. O’Rourke amplified that position to its widest audience yet Thursday when he vowed at the third primary debate in Houston that “hell, yes,” he wants to take away people’s AR-15s and AK-47s.

O’Rourke did not have a response to the fresh attacks Tuesday but he has vigorously defended mandatory buybacks since the debate, saying the issue transcends politics and that the El Paso massacre convinced him it is not enough to just support an assault weapons ban. And his campaign has pointed to polling that shows the idea is not as unpopular as critics make it out to be, registering 52% support among Americans in an ABC News/Washington Post poll released last week.

So far, both Patrick and O’Rourke have been the most forceful voices in their parties for their respective positions, at least in Texas.

No other statewide official has fully backed up Patrick on requiring background checks for stranger-to-stranger sales. Cornyn and the state’s junior U.S. senator, Ted Cruz, have demurred on the idea or distanced themselves from it, while Gov. Greg Abbott has asked the Legislature only to consider such background checks as a voluntary measure.

Other Republicans have been more blunt about Patrick’s stance.

“Your unwillingness to defend the rights of law abiding citizens to appease Democrats is what’s destroying the GOP,” Sullivan, the head of Empower Texans, tweeted at Patrick on Tuesday morning amid their tussle over the issue.

At the same time, few, if any, of O’Rourke’s primary opponents have been as vocal in embracing mandatory buybacks for assault weapons — and some have pointedly pushed back on it. That was true of South Bend, Indiana, Mayor Pete Buttigieg, who said Sunday the proposal plays into the hands of Republicans and could compromise a golden opportunity at bipartisan consensus on combating gun violence. President Donald Trump and U.S. Senate Majority Leader Mitch McConnell “at least are pretending to be open to reforms,” Buttigieg said.

The Texas Tribune thanks its sponsors. Become one.https://tpc.googlesyndication.com/safeframe/1-0-37/html/container.html

That drew a rare rebuke of a fellow candidate by O’Rourke, who dinged Buttigieg on Twitter and kept up the offensive hours later after a rally where his call for mandatory buybacks drew loud cheers and then chants of, “Hell, yes!”

“On guns especially, I hear a lot of the other candidates say, ‘Well, there seems to be consensus and compromise on being able to do these few things, and it sounds like Mitch McConnell and Donald Trump are at least pretending to be interested,'” O’Rourke told reporters. “Well, shit, Mitch McConnell and Donald Trump pretending to be interested in something that is literally a life-or-death issue for 40,000 Americans — that’s literally how many are killed every year through gun violence — is simply not enough.”

The other Texan running for president, Julián Castro, proposed a buyback program after the El Paso massacre but did not specify whether it would be mandatory. Asked after the debate about the idea, Castro told The Texas Tribune that he is “willing to hear the arguments on mandatory buybacks” but focused on proposals including universal background checks and an assault weapons ban.

Asked Saturday if the mandatory buyback proposal is a litmus test for Democrats, O’Rourke told reporters after an appearance in Katy it is a “matter of their conscience” and “whether or not they’re going to reflect the courage that people across this country have, the urgency that they feel, the desire and demand that they are producing to make sure we get this right finally after decades of inaction.”

Even before O’Rourke’s debate moment, the issue was having an impact farther down the ballot in Texas, including in the crowded Democratic primary to take on Cornyn. After the recent shootings, one of the candidates, Cristina Tzintzún Ramirez, backed mandatory buybacks for assault weapons as part of the March for Our Lives Peace Plan, which O’Rourke has also endorsed. Two other U.S. Senate candidates, Chris Bell and Sema Hernandez, expressed support at a recent forum for buying back guns but did not get into the details of whether they want it to be mandatory.

Other U.S. Senate contenders, such as MJ Hegar and state Sen. Royce West, have not gone as far as to voice support for gun buybacks of any kind. But they appear to recognize the changing politics of guns, even in Texas; Hegar came out last week in support of ending open carry and halting the “sale of assault weapons to the public.”

Republicans are watching closely, especially as most in the field continue to speak warmly of O’Rourke and his breakthrough 2018 campaign.

“Texas voters deserve to know if the Senate primary candidates are going to continue to stand with Beto now and support his plans to mandate a federal gun buyback program,” Joanna Rodriguez, a spokeswoman for the National Republican Senatorial Committee, said in a recent statement.

The issue could also flare up in state House races, where O’Rourke is an increasingly visible figure. After state Rep. Briscoe Cain, R-Deer Park, told O’Rourke that “my AR is ready for you” Thursday night on Twitter, the Democrat’s campaign sent out a fundraising email for Cain’s challenger, Josh Markle, urging supporters to “put an end to this guy’s insane death threats AND his career in the Texas legislature.”

Markle did not immediately respond to a request for comment Thursday afternoon on how much O’Rourke has helped him raise and whether he has any view on mandatory buybacks.

Eliz Markowitz, another state House candidate whom O’Rourke stumped for Saturday, said she supports universal background checks and “red-flag” laws but would be “hard-pressed” to support a mandatory buyback for now.

Among Democrats already in the Legislature, there has been little talk of backing up O’Rourke on mandatory buybacks as members stake out more politically pragmatic territory in hopes of persuading the Republican majorities. In a letter to Abbott earlier this month calling for a special session on gun violence, the House Democratic Caucus pushed for five comparably modest gun proposals, such as closing background-check loopholes and banning the sale of high-capacity magazines.